Generally, deserts do not have a lot of water. It is the missing part in the desert. The Western Desert, however, has plenty of water. The trouble is that it is not easy accessible. The water is trapped in subterranean chambers.
In the depressions of the Western Desert, however, the water is easily accessible. Here the floor of the desert is near or below sea level and the water gushes from natural springs or can be tapped by drilling wells. The farther south the water source, the fresher the water becomes.
The oases of Bahariya, Dakhla and Kharga have the sweetest and most plentiful water supplies. The Siwa oasis has highly salinized water. Not all the springs in the oases are sweet. Many springs are brackish and unpleasant in taste. All these springs, however, contain gases and minerals of great medicinal value.

The Western Desert has many springs and wells. If the water bubbles up naturally from the earth, it is called a spring (ain). If the water has to be coaxed from the earth by man, it is called a well (bir).
Almost any time a well is drilled for irrigation, the water comes out hot and mineral-rich from aquifers as much as 1 km below the desert. Wherever it gushes from the pipe, there inevitable forms a large pool. Generally these days a cement tank is built, with a sluice system to control the flow of the water into the irrigation channels.

There are an amazing number of wells in the desert, also with historic sites around it. Many of them are cold-water wells. The majority of the wells in the Western Desert, however, are hot-water wells. The wells that produce hot water are deep and described as thermal. They are one of the great pleasures of the desert.
The experience to bathing in one of these wells, particularly at night, can be unforgettable. With no bright city lights to interfere, the stars shine exceptionally bright.
Etiquette demands that you wait your turn if the well is occupied. Women should bathe in an on-piece suit with t-shirt on top. Keep in mind that the minerals in the water can stain whatever they get on. Consider it as a free souvenir of a night to remember.

In Siwa Oasis there are dozens of springs in which travellers can bathe. Most of them are surrounded by palm groves. And … they have wonderful bubbles. You can watch the bubbles race through the clear water from fissures in the rocks at the bottom of the pools, rising to tickle the toes, belly, and nose on their way to the surface. Two springs are famous, not only for the pleasure of swimming in their bubbling waters, but also for the history and events that have taken place around them.

Bahariya Oasis has more than 400 springs and wells that are rich with minerals and sulphurous, warm and cold. People believe that the mineral and sulphurous hot wells are very effective in healing many illnesses, like rheumatism and skin diseases.

There are more than 100 springs ands wells spread in the Farafra area. Most of the wells are used in aggregation of the cultivated land in the oasis. Some of the wells in Farafra have become favourite touristic destinations, because of their warm water temperature and the slight percentage of Sulphurous in the water. The wells are very popular for swimming and relaxing. It is a perfect way to finish a desert safari. 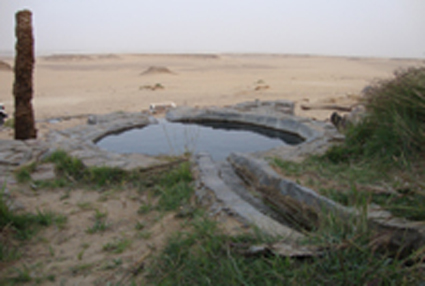 Although there has been created an artificial lake just north of Mut to drain the water from the fields, the main water source are still springs and wells. The whole length of Dakhla is dotted with hot springs. It has over 520 wells.

There are hundreds of springs and wells in Kharga. Most of them have been running non-stop night and day for thousands of years with no sign of abating.