Discover the pure nature of the Western Desert!
It has always been a mysterious land. 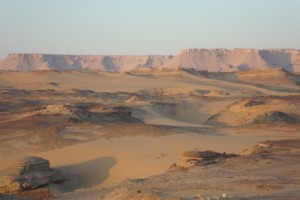 Egypt’s Western Desert, also called Libyan Desert, is really hard to describe in one go. It is huge and one of the most arid regions on Earth. The Western Desert covers an area of about 671,000 square kilometres and accounts for about two-thirds of Egypt’s land area. This immense desert to the west of the Nile spans the area from the Mediterranean Sea south to the Sudanese border.

It is basically a bedrock platform cluttered by sand fields that contain several varieties of sand dunes. The generally flat terrain is broken by several large enclosed or partly enclosed depressions and by the salient basements high of the Uweinat region at the Egyptian-Libyan-Sudanese border.

There are seven major depressions in the Western Desert: Qattara, Kharga, Dakhla, Farafra, Bahariya, Siwa and the Fayum. They all are considered oases, except the largest, Qattara, of which the water is salty. The Qattara Depression is about 15,000 square kilometres. Its lowest point is 133 meters below sea level. Badlands, salt marshes, and salt lakes cover the sparsely inhabited Qattara Depression. All the depressions tend to be near a geological boundary and are surrounded totally or in part by a cliff called scarp, the top of which is at the level of the normal desert floor. The major depressions all have northern scarps, with Bahariya and the Fayum completely hemmed in.

The Great Sand Sea lies within the north-eastern part of the Western Desert and is a desert within a desert. Its area size is enormous, extending for about 600 km between Siwa Oasis in the north and the Gilf Kebir plateau in the south. It is the second largest continuous sand covered area on earth (after the Grand Erg Oriental, in Algeria). It forms a natural barrier between Egypt and Libya. From west to east, this fabulous and extremely beautiful land is about 400 km wide (at it widest point). It gives way to gravel plains, mud pans and the perfectly flat and featureless Selima Sand Sheet plains. Here nothing lives, not a single human soul, nor animal.

The Gilf Kebir plateau, in the south of the Western Desert, has an altitude of about 1,000 metres, an exception to the uninterrupted territory of basement rocks covered by layers of horizontally bedded sediments forming a massive plain or lower plateau. It is known for its rugged beauty, remoteness, geological interest and the dramatic cliff paintings (pictographs and rock carvings (petroglyphs), which depict an earlier era of abundant animal life and human habitation.