Dendera is located on the west bank of the Nile, about 70 km north of Luxor. Along with Abydos further north on the Nile, is Dendera a popular day trip from Luxor.

Dendera was once the capital of the 6th Nome (Pharaonic province) of Upper Egypt. The Dendera temple complex covers about 40,000 square meters. The present building dates back to the times of the Ptolemaic period. The temple which we see today was begun in 125 BCE under Ptolemy 8 and was completed by the Roman emperor Tiberius (14 – 37 CE). The temple was built on top of an older temple, the date of which remains unclear. Oriented towards the Nile the temple follows the fairly typical plan of other temples from this period. The temple is boxy in shape and surrounded by a portico with thick columns and mud-brick walls about half as tall as the roof. There are many reliefs of figures and rituals on the exterior of the temple, including pharaohs, Egyptian gods and Roman emperors. The interior decoration remains intact, and colourful reliefs in a few of the chapels recapture something of the richness of the temple interior as it must have appeared two thousand years ago. 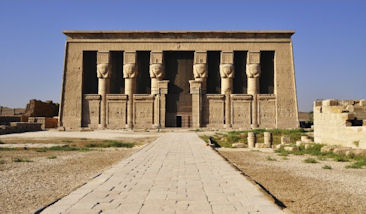 The temple of Dendera is dedicated to the goddess Hathor, wife of Horus. Their son Ihy makes up the conventional triad. Hathor was an immensely popular deity in Ptolemaic times. The goddess Hathor is associated with spiritual nourishment and healing, lovemaking, music and cheerfulness.

The temple is approached along a stone pavement, flanked by what remains of an avenue of Roman columns with Corinthian capitals. Basins, where fountains once played, may be seen to either side. A monumental gateway leads to the temple court. Inside the mud-brick walls there is a small but lively relief carving of Bes, the hideous but friendly dwarf-god who was thought to always be around, during festivities and celebrations. He was a domestic deity, usually shown playing a tambourine.

The temple has an imposing facade constructed as a low screen wall divided by 6 massive Hathor-headed columns and a huge curved cornice with a winged sun-disc over the entrance.

The astronomical ceiling is divided by the rows of columns into six sections, each of which has special significance. It is decorated with vultures, winged discs and the union between Hathor and Horus. The colours are beautiful and are mostly still original. The rest of the ceiling has astrological and other signs and symbols. It is a symbolic representation of the north and south halves of the sky, the hours of day and night, and the regions of the moon and sun. The bays to the right show the northern stars while the left shows the southern stars. The figure of Nut dominates each end of the hall. She is representing the continuing cycle of a day. Her dress is the sky; between her legs is the birth of the sun, which disappears at night as she swallows it. The second band shows the stars, planets and symbols of the Roman zodiac. The bands on either side of the centre show the course of the moon and sun.

Scenes on the walls show the king emerging from the temple, breaking the earth for the foundation, and placing the first stone. He then dedicates the foundation deposit bricks to Hathor. The Hall of Appearance is flanked by six rooms, each highly decorated and well preserved. These rooms served as storehouses, treasuries and workrooms.

The treasury room contained holy objects made of metal. Jewels and precious metals were offered to Hathor in the reliefs. Another room was a preparation area for incense and perfumes. The reliefs show kings offering incense and jars of ointment to Hathor and other deities. One room was probably a library where ritual texts would have been stored. The pharaoh is shown before the temple trinity presenting papyrus rolls and symbols of cosmic consciousness. And then there is a storage room and a room for wet and dry offerings. Provisions would be brought into the temple through side doors in each room.

In this hall, lighted only by four ceiling vents, the priests would lay out the offerings on portable altars, several times a day, with large quantities of food and drink to delight the goddess. The back wall displays the items required for the offerings, while the opposite side displays the king offering Hathor drinks. The Hall of Offerings contained a small chapel used for sacrificial offerings.

This sanctuary is a separate structure within the temple, having its own roof and exterior. The room contained the statues of Hathor, her barque and Horus. The walls depict the awakening, bathing, anointing and feeding of the goddess. Miniature barques are also featured on the walls.

The most interesting features of the upper storey are the twin chapels in which the mysteries of Osiris were celebrated. The chapels each have a small courtyard, a vestibule and an inner chamber. The open courtyard of the first chapel shows priests attending the funeral of the god. Texts describe how Osiris vital force germinates life from dead matter. The mystery celebrated on the walls of the inner chamber concerns the magic which Isis worked to impregnate herself with the seed of Osiris.

The vestibule of the second chapel is mainly of interest for a sundial and the circular zodiac on the ceiling. The zodiac, a replica of the original that is now in the Louvre in Paris, consists of two superimposed constellations. One is centred on the geographical North Pole, the other on the true North Pole. An axis passes through Pisces, confirming what we know from archaeological evidence: it was built in the age of Pisces, just over 2,000 year ago.

Among the many other structures here are the remains of a 5th-century Christian basilica, an excellent example of early Coptic Church architecture. There is also a sanatorium, where pilgrims could bathe in the sacred waters or take holy water – which had been run over magical texts to infuse it with power – home with them. And we’ll find a small chapel dedicated to Isis. The area around the temple has been extensively landscaped and now has a modern visitors centre, bazaar and a small cafeteria.