Gebel Silsila is the name given to a rocky gorge, between Edfu and Kom Ombo, about 70 km north of Aswan. Here the Nile River narrows and the hills on the opposite banks come closer together. It is here that the bedrock changes from limestone to sandstone.

Gebel Silsila was used as a quarry site from at least the New Kingdom to Greco-Roman times. The quarries are located on both sides of the Nile and were worked by thousands. The massive quarries produced the sandstone which the workmen needed to build the temples and monuments of the pharaohs, such as the Karnak Temple, the Ramesseum and Medina Habu, to name a few. By Ptolemaic times most of the Upper Egyptian temples contained elements from Gebel Silsila sandstone. Because of the sanctity of the site, the sandstone was considered to have an extra holiness.

The steep sandstone cliffs in the area are cluttered with ancient graffiti, shrines and steles, including 33 rock chapels. Among the grottos and shelves of quarried sandstone, several unfinished sphinxes remain, of both the ram and human-headed variety, forever rooted to the bedrock.

In the 18th Dynasty Tuthmose 1, Hatshepsut, Tuthmose 3 and Horemheb left there heritage behind at Gebel Silsila in the form of a rock cut chapel. In the 19th Dynasty Ramses 2, Merenptah, Siptah, Seti 2, Ramses 3 and Ramses 5 followed with steles carved on the rocks.

The majority of rock shrines can be found in the northern part of the area, although many are damaged. The shrines belong to high officials, priests, royal scribes and nobles of the time. Some chapels contain statues of the owner and have beautiful decorated ceilings.

It was Seti 1 who left an inscribed Hymn to the Nile and inaugurated two festivals. Ramses 2 and Merenptah continued these festivals.

Finally, Gebel Silsila became an important cult centre. Each year at the beginning of the season of inundation, offerings and sacrifices were made to the gods associated with the Nile to ensure the country’s wellbeing for the coming year. 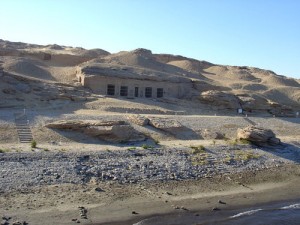 Horemheb was the last pharaoh of the 18th Dynasty. The magnificent Speos of Horemheb is a rock-cut chapel with five openings formed by four pillars. The chapel is dedicated to Amun and a variety of deities associated with the Nile and the area of Aswan. A ramp of steps once accessed the chapel from the river. Inside there is a vaulted hall that leads to the sanctuary. In the sanctuary are seven statues, including that of Amun (in the centre) and the Pharaoh Horemheb.

In the sanctuary are seven statues, including that of Amun (in the centre) and the Pharaoh Horemheb.

All the walls are covered in reliefs and inscriptions, some in a very fine high quality. As Horemheb himself never finished the speos, the decorations were finished later by different pharaohs and nobles, who carved their own stele and inscriptions. Two scenes in the speos are really worth to mention. One of them is the famous Victory of Horemheb, which depicts the king being carried on his lion-throne after a Nubian campaign, with the retinue and his Nubian captives. The other one shows the goddess Tauret in a rare human-headed form suckling a young Horemheb.

South of the Speos is a stele with inscriptions showing offerings from Ramses 3, Ramses 5 and Shoshenq 1 to the gods of Thebes, Heliopolis and Memphis. There are small chapels beyond which are actually tombs commemorating the Nile.